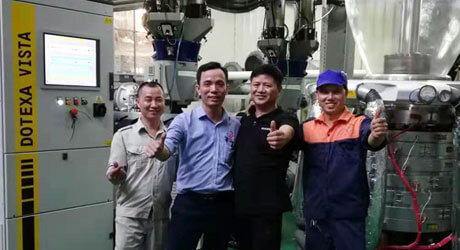 The machine is equipped with an Italian Doteco automatic air ring thickness measurement system and the four-component feeding system, which brings great convenience for customers to control film thickness uniformity and automatic mixing while achieving an output of up to 420kg/h. The POD non-barrier five-layer co-extrusion machine has outstanding advantages compared with general single-layer and three-layer co-extrusion machines. As it co-extrudes five layers, it can not only produce some special functional films that are impossible for single-layer and three-layer machines but also the five-layer co-extrusion technology greatly improves the economic efficiency and film characteristics of the products. The five-layer co-extrusion can make the films thinner, or relieve the dependence on high-caliber raw materials, therefore significantly reducing the cost of raw materials. Also, it enables the production of films with equivalent or even better characteristics, such as heat sealing performance, optical performance, puncture resistance, etc.